In a research report published Thursday, Roth Capital analyst Joseph Pantginis maintained a Buy rating on shares of Cytokinetics, Inc. (NASDAQ:CYTK) with a price target of $18, after the company announced second-quarter results, posting EPS of ($0.27) compared with Pantginis’ estimate of ($0.31) and the consensus estimate of ($0.24). In reaction to the results, Cytokinetics shares are falling 13.60% to $6.10 as of 12:54 p.m. EDT today.

Pantginis noted, “We believe the company’s dynamic is quickly changing and will be highly visible going forward as it is now in both the Phase III execution phase as well as expecting a major data read out in 4Q15 for COSMIC-HF for partner Amgen’s omecamtiv mercarbil in heart failure. Behind the scenes both companies have been in deep discussions in preparation for a potential Phase III start in 2016. We also expect growing visibility out of partner Astellas for CK-107 and the planned Phase II start in SMA patients in 4Q15.”

“Internally, the lead focus is the just started tirasemtiv Phase III (VITALITY-ALS) study in ALS patients, off the BENEFIT-ALS Phase II, which showed tirasemtiv to be the only drug to have a positive impact on breathing capacity in ALS patients. Based on in depth discussions with both the FDA and EMA the study is focused on slow vital capacity and several secondary endpoints from which the regulatory bodies will look at the data set in total and see if they confirm the positive observations made in BENEFIT-ALS.” 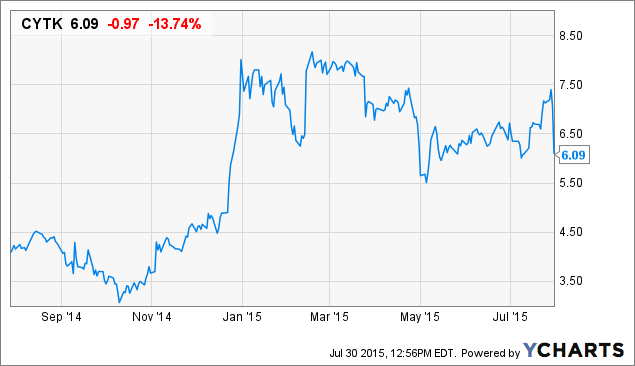