In a research report published Friday, Roth Capital analyst Debjit Chattopadhyay reiterated a Buy rating on Sarepta Therapeutics Inc (NASDAQ:SRPT) with a price target of $22, as the company is scheduled to report its fourth quarter and full-year 2014 financial results before the market opens on Thursday, February 26, 2015. The analyst expects SRPT to report a non-GAAP loss of $(0.84)/share and end the year with ~$218M on its balance sheet.

Chattopadhyay noted, “With the 168-week data readout in the rear view mirror, emphasis has shifted to operational items including its planned NDA submission during mid-2015. Sarepta is no longer a one drug story and its current EV (~$367M) significantly discounts pipeline potential. Sarepta was highlighted as our top contrarian pick on 12/23/2014.”

Bottom line, “With the 168 week data out of the picture, broad clinical program encompassing three drugs underway, morpholinobased pipeline expanding beyond DMD, the risk-reward is attractive at current levels, in our view.” 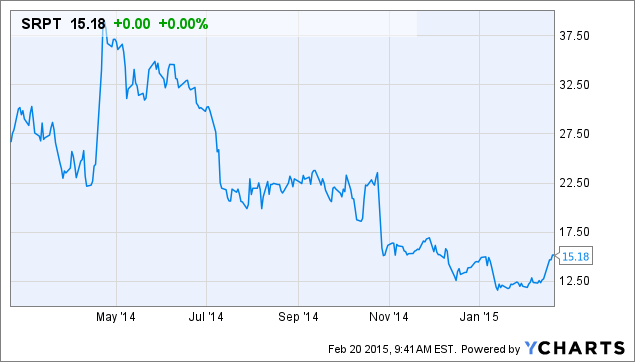