In a research note published yesterday, Roth Capital analyst Joseph Pantginis reiterated a Buy rating on Synta Pharmaceuticals (SNTA) with a $27 price target, on the heels of the company’s second-quarter results and the appointment of the company’s new CEO, Anne Whitaker.

Pantginis noted, “Ms Whitaker is currently President, North America Pharmaceuticals at Sanofi and has extensive experience in the pharmaceuticals industry, particularly in product commercialization. Synta also announced 2Q14 results, posting EPS of ($0.24) compared with our estimate of ($0.26) and the consensus estimate of ($0.27). The company ended the quarter with $112.1 in cash, in addition to $12.1 million raised through its ATM subsequent to quarter end (runway through 4Q15 according to management). Additionally, Synta reported enrollment in the GALAXY-2 study is on track to meet data readout timelines: two interim analyses in 2H15 and final survival analysis in 1H16”.

Furthermore the analyst noted, “We are encouraged by the appointment of the new CEO, Anne Whitaker, particularly as we believe her commercialization skills and knowledge will come in handy for Synta as it grows its marketing and commercialization efforts, as well as her drug development and business development skills that can assist Synta in potential partnership discussions. SNTA management stated that current cash position will provide funding for operations into 4Q15. As final data readout and potential ganetespib marketing will occur after that time, Synta management stated it is exploring several funding options to bring the study over the finish line. The company also noted it is receiving expressions of interest from potential partners and is currently having discussion surrounding the matter. We believe that ganetespib has partnering potential, based on positive randomized Phase II GALAXY-1 data and that such partnership can not only assist in GALAXY-2’s funding but also increase the broad potential applicability to multiple tumor types. Additional data readouts from the IST studies in breast, ovarian and AML studies should bolster this thesis, in our belief”. 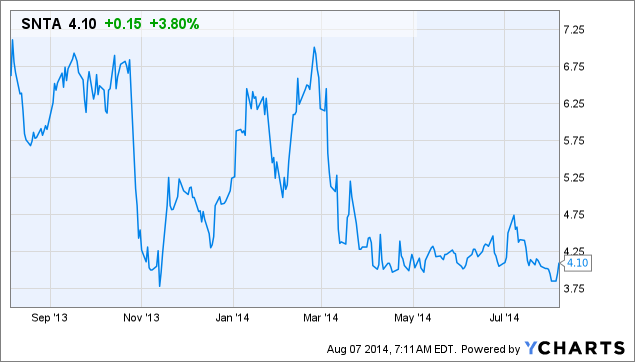