In a research report released yesterday, Roth Capital analyst Joseph Pantginis reiterated a Buy rating on Sunesis Pharmaceuticals (SNSS) with a $15 price target, following the company’s second-quarter results, posting EPS of ($0.20) and revenue of $2 million. The company also announced that the pivotal Phase III VALOR trial has reached the pre-specified number of events for unblinding. Topline data are expected in 2H14.

Pantginis wrote, “With VALOR having reached 562 events, the prespecified number for unblinding, SNSS is now working with investigators to lock the study database. The company expects topline data in 2H14. Recall that the VALOR study is a 700-patient, randomized, double-blind pivotal study in patients with first relapsed or refractory AML. The study is evaluating a 1:1 ratio of vosaroxin:cytarabine versus placebo:cytarabine with a primary endpoint of OS. Unblinding will be a binary event for SNSS, but we believe the previous interim analysis driven upsizing of the study due to favorable characteristics bodes well. SNSS has begun investing in a U.S. launch plan, including the hiring of commercial, market access and medical science leadership teams. VALOR data will be supported by several additional studies including a Phase I/II investigator-sponsored study of vosaroxin in combination with azacitidine in MDS patients at Washington University and a Phase I/II IST in previously treated high-risk MDS at Weill-Cornell. In June 2014, Sunesis announced the EMA’s acceptance of the Pediatric Investigation Plan (PIP) for vosaroxin. This plan must be accepted prior to submission of an MAA in the E.U. SNSS has received a deferral of completion, meaning that studies described in the PIP are not required to be completed prior to E.U. approval”. 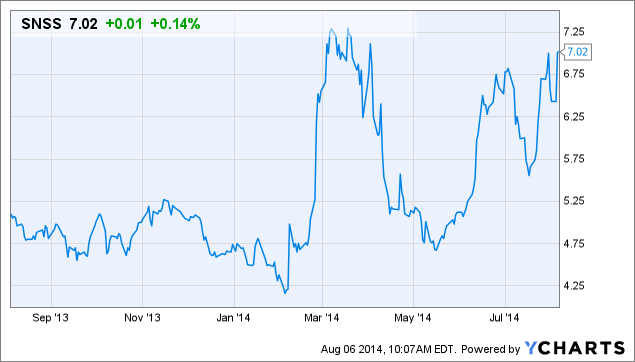