In a research note released today, Roth Capital analyst Debjit Chattopadhyay reiterated coverage with a Buy rating on shares of Sarepta Therapeutics, Inc. (SRPT), and a price target of $52.00, which represents a potential upside of 102% from where the stock is currently trading.

Chattopadhyay noted, “Sarepta continues to make solid progress with manufacturing and we anticipate patient dosing in the confirmatory study during 3Q 2014, followed by the NDA submission during 4Q 2014. We continue to believe that a 2H-2015, accelerated approval is a high probability event. In our opinion, Sarepta’s PMO-based chemistry has some significant near and long-term advantages over other competing antisense platforms”. The analyst added, “We view the recent weakness in the stock as an opportunity to establish new positions or add to existing positions”.

According to TipRanks.com, which measures analysts and bloggers success rate based on how their calls perform, analyst Debjit Chattopadhyay currently has an average return of 3.6% and a 33% success rate. Chattopadhyay is ranked #2266 out of 3162 analysts. 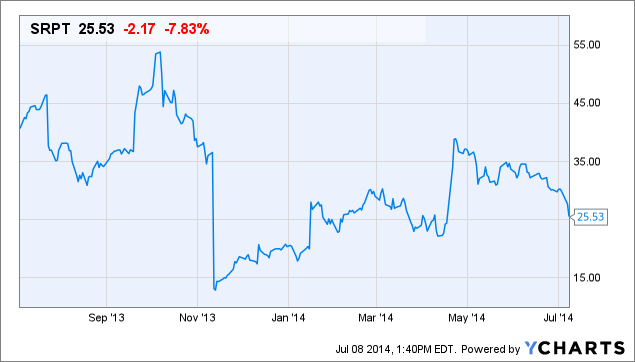