In a research note published today, Roth Capital analyst Debjit Chattopadhyay reiterated a Buy rating on Sarepta Therapeutics (SRPT) with a $34 price target, following the appointment of John Hodgman, as the interim chairman, replacing William Goolsbee, who will continue to serve on the board as an independent director.

Chattopadhyay noted, “It appears that CEO Chris Garabedian, now has the full backing of the board. However, the real vindication of his aggressive regulatory strategy can only be realized upon eteplirsen’s accelerate approval. We look forward to the 2Q conference call for further details”. He continued, “Contrary to the earlier WSJ report, we believe the board has not curbed Chris’ broad sway over Sarepta’s strategy and especially his involvement with the FDA. In our opinion, Chris’ aggressive regulatory strategy has brought Sarepta close to the finish line and we hope the recent management changes are no more than a fleeting distraction”.

The analyst added, “Although Sarepta has the smallest dataset, eteplirsen, appears to be better positioned from a tolerability and dosing perspective in this chronic indication where young boys could be on therapy for up to a decade or longer. We view the recent weakness in the stock as an opportunity to establish new positions or add to existing positions”. 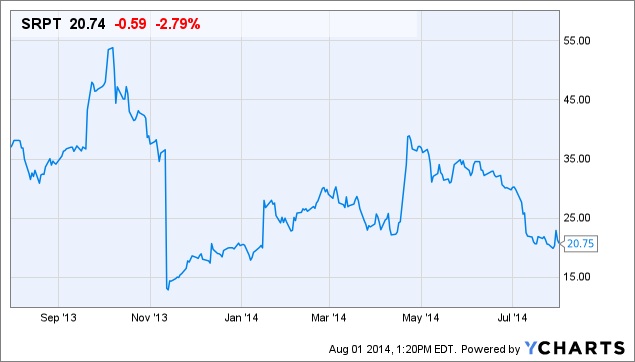