In a research note issued today, Roth Capital analyst Richard Baldry reiterated coverage with a Buy rating on shares of Salesforce.com, Inc (CRM), and an $80 price target on the heels of the recent acquisition of RelateIQ Inc., which automatically captures data from email, calendars and smartphone calls, in a deal valued around $390 million.

Baldry commented: “Most CRM tools simply rely upon user input covering prospect interactions. RelateIQ instead focuses on automatic data feeds and data discovery to aggregate richer data. Whether found in calendars or email, or other operational or service/support systems, the improved data better arms sales personnel even while their time burden to input data is reduced. We see this as a highly complementary data-driven value-add layer for Salesforce.com’s core CRM offerings. Salesforce.com should benefit from higher revenues per client as the functionality is sold across its large user base”.

The analyst continued, “Salesforce.com’s scale gives it an ability to generate over $1 billion in operating cash flows annually. Against this backdrop, the RelateIQ acquisition could be viewed as “costing” Salesforce.com as little as 90 days of cash flow, a metric we view as inexpensive versus the strategic value we see”.

According to TipRanks.com, which measures analysts and bloggers success rate based on how their calls perform, analyst Richard Baldry currently has a one-year average return of 10.7% and a 64% success rate. Baldry has a 24.9% average return when recommending CRM, and is ranked #1220 out of 3215 analysts. 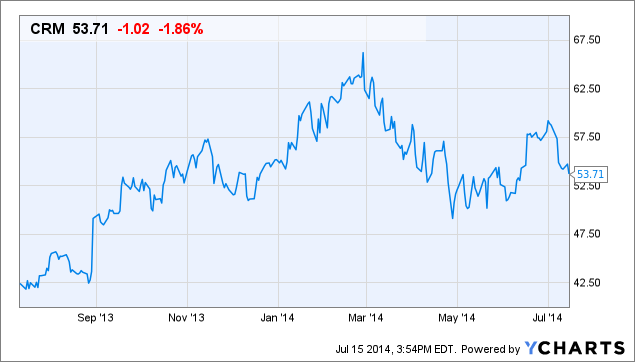