On Friday, Regeneron Pharmaceuticals (REGN) announced results from the Phase III VIVID-DME study of Eylea in DME that showed that treatment with Eylea 2 mg dosed monthly and treatment with Eylea 2 mg dosed every two months (after 5 initial monthly injections) both showed an improvement in best corrected visual acuity that was sustained for 2 years, compared to laser photocoagulation.

After reviewing the data, Roth Capital analyst Joseph Pantginis issued a report reiterating his Buy rating and $382 price target on the stock. Pantginis noted, “We are encouraged by this long-term data for Eylea in DME. At the 2 year time point, mean change from baseline in BCVA was 11.4 letters for patients receiving monthly dosing of Eylea, 9.4 letters for patients receiving every other month dosing of Eylea, and 0.7 letters for patients receiving photocoagulation. Also, significant proportions of patients receiving monthly dosing of Eylea (38%) or every other month dosing of Eylea (31%) achieved an increase of 15 letters or more, which is equivalent to three lines of vision. Only 12% of photocoagulation patients achieved this result. Ocular and non-ocular AEs, including arterial thromboembolic events, were similar in all treatment groups. The VIVID-DME trial will continue for up to 148 weeks, as planned. REGN and Bayer (BAYRY) are collaborating to develop Eylea globally. The drug is approved in the U.S. and E.U. for wet AMD and macular edema following CRVO. The European CHMP has given a positive opinion for Eylea for DME and regulatory submissions have been made in the U.S. and other territories. Regulatory submissions have also been made in the US and EU for macular edema following BRVO. Recall that REGN has also recently announced positive data from the Phase IIb study of dupilumab in atopic dermatitis and positive data from the Phase III study of sarilumab in RA, both with partner Sanofi (SNY). 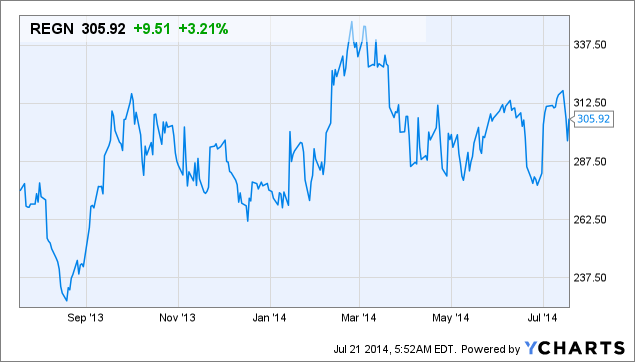