Yesterday, Regeneron Pharmaceuticals (REGN) announced second-quarter results, posting EPS of $0.82. Revenue came in at $665.7 million vs. a consensus of $647.6 million.

In reaction to the results, Roth Capital analyst Joseph Pantginis reiterated a Buy rating on the stock with a $399 price target.

Pantiginis wrote, “REGN 2Q14 results show a 45% year-to-year growth in revenue as well as a 26% Eylea net sales growth, demonstrating the effective market penetration of the product. Recall that Eylea is already approved in the U.S. and E.U. for wet AMD and macular edema following CRVO. With Eylea’s recent approval in DME, the 3rd indication for the product, we believe it will increase its growth and hold on the retinopathy field. The Eylea approval for DME marks the first time a VEGF inhibitor has been approved for the treatment of DME using injections that are less frequent than monthly. REGN believes the route to gaining patients in this indication is favorable as they are treated by the same physicians already prescribing Eylea for wet AMD and macular edema following CRVO. Recently Eylea has been recommended by CHMP for use in DME in Europe and regulatory submissions have been made in Japan as well. Regulatory submission have also been made in the U.S. and E.U. for Eylea for the treatment of macular edema following BRVO. PDUFA date for the sBLA for Eylea in this indication is set for October 23rd, 2014. We are impressed with the continued increase in Eylea sales along with its recent and upcoming regulatory catalysts as well as from REGN’s strong collaborative R&D and commercial ties with other pharma and the favorable outcome measures from the advanced stage of REGN’s three antibodies in Phase II and III”. 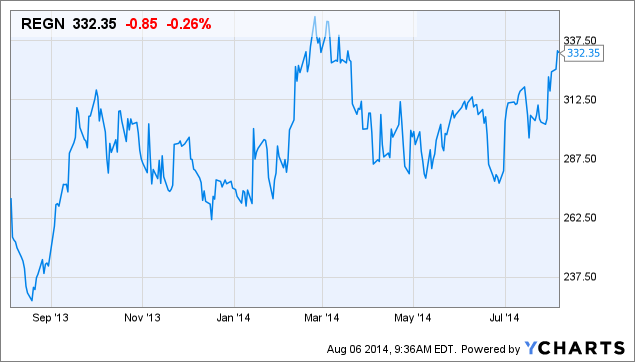