Yesterday, the FDA granted full approval to Pharmacyclics’ (PCYC) for Imbruvica for both treatment naive del17p (poor cytogenetics) CLL patients and all CLL patients who have received at least one prior therapy. These approvals came following the February 2014 accelerated approval in previously treated CLL and ahead of the October 7, 2014 PDUFA date for full approval in CLL/SLL. The approval also entitles PCYC to a $60 million milestone payment from Janssen.

In reaction to the approval, Roth Capital analyst Joseph Pantginis yesterday reiterated a Buy rating on PCYC with a $183 price target, which represents a potential upside of 75% from where the stock is currently trading.

Pantginis wrote, “We believe these new approvals and labeling changes will continue to strengthen Imbruvica’s foothold as a new potential cornerstone in treating B- cell lymphomas. Recall that CHMP recently recommended E.U. approval for the drug as well and we expect approval by year end. We are also encouraged by the full approval in treatment naive del17p patients, as this represents the first approval for the drug in the front-line setting. Recall that these full approvals were based on randomized data from the 373 patient Phase III RESONATE study which showed statistically significant improvements in PFS, 120.00 OS, and ORR versus ofatumumab. Imbruvica led to a 78% reduction in the 100.00 risk of progression or death versus ofatumumab. We believe the drug may now 80.00 be viewed as a real alternative to chemotherapy. There are currently 10 active 60.00 Phase III studies being run in conjunction with worldwide partner Janssen”. Pantginis addded, “We believe that with the full approval now in place, PCYC and Janssen/JNJ will deliver a strong success story with Imbruvica”. 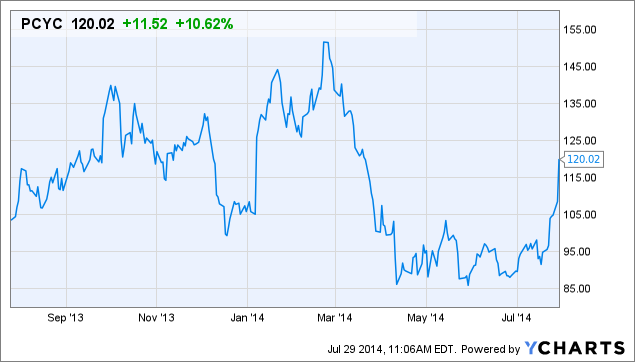