In a research note published August 11, Roth Capital analyst Joseph Pantginis issued a note in which he reiterated a Buy rating on Peregrine Pharmaceuticals (PPHM) with a $5 price target, following new preclinical combination data of PPHM’S PS-targeting antibody and an anti-PD-1 antibody in a breast cancer model, showing statistically significant tumor growth inhibition over anti-PD-1 antibody alone. While this is in early development stages, these data support ongoing combination studies of bavituximab with checkpoint inhibitors.

Pantginis noted, “While we generally don’t write on preclinical data, we believe that these new data represent an important development for the potential expansion of bavituximab into the breast cancer indication as well as additional support for combination of bavituximab with checkpoint inhibitors. These new combination data give further support to the underlying hypothesis of combining bavituximab with a checkpoint inhibitor, an approach currently tested in the ongoing Phase Ib IST of bavituximab + Yervoy for advanced melanoma. Management indicated it is interested in expanding bavituximab’s profile into other indications, particularly in breast cancer and these new data lend support to the rationale of applying this combination in this indication. Recall that data presented at ASCO 2014 from an IST of bavituximab + paclitaxel in HER2-negative metastatic breast cancer, showed that 85% of patients achieved ORR, with 15% achieving CR by RECIST. Peregrine continues to focus on clinical development of bavituximab. Over 100 sites are now open for the ~600 patient Phase III SUNRISE trial of bavituximab + docetaxel in Stage III or IV NSCLC in the U.S., E.U., and Asia-Pacific. The study recently received Fast Track status in the U.S. Management has indicated that early enrollment progress in the study is meeting expectations.” 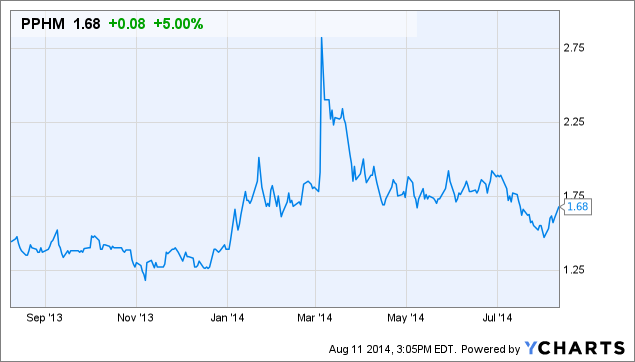