In a report issued today, Roth Capital analyst Joseph Pantginis reiterated a Buy rating on Ligand Pharmaceutical (LGND) with a $92.00 price target, following LGND’s announcemet that total revenue for 2Q14 is expected to be ~$10.6 million, beating the company’s previous guidance of $9.0-9.5 million.

Pantginis noted, “We are encouraged by LGND’s revenue projections for 2Q14 and that the company has paid off its debt while achieving the highest cash balance that it has had in more than two years. We believe this is just the beginning of more success to come from LGND’s royalty revenue business model. Current revenue streams are beginning to bear much fruit, and we believe the company’s strong pipeline of partnered products will allow continued EPS growth going forward. Partner Sage Therapeutics announced that it will increase the size of its proposed IPO, which is expected to go public on Friday, by 50% from previous estimates. Sage and LGND are partnering to develop Captisol-enabled CNS therapeutics. With current revenue streams from Promacta and Kyprolis, anticipated near-term significant revenue contribution from Duavee and CE Melphalan, and increasing requests for Captisol, we believe LGND is positioned for growth”.

According to TipRanks.com, which measures analysts and bloggers success rate based on how their calls perform, analyst Joseph Pantginis currently has an average return of -12.9% and a 24% success rate. Pantginis has a -18.4% average profit recommending LGND, and is ranked #3195 out of 3215 analysts. 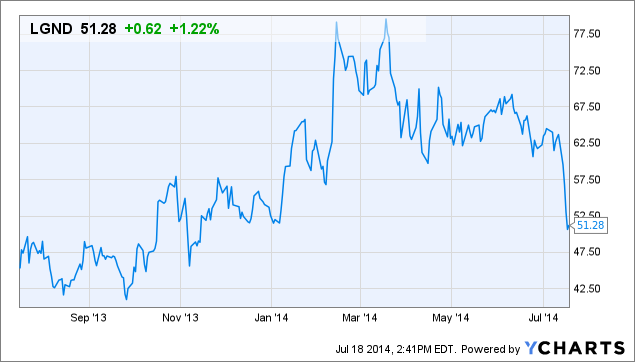