In a research note released today, Roth Capital analyst Joseph Pantginis reiterated a Buy rating on Keryx Biopharma (NASDAQ:KERX) and raised his price target to $32 (from $30), on the heels of the news that KERX received FDA approval for Ferric Citrate for the control of phosphorus levels in dialiysis-dependent chronic kidney disease.

Pantigins wrote, ”We believe the drug’s iron-sparing component, which leads to important reductions in IV iron and ESA use provides significant differentiated properties. We anticipate a strong U.S. launch, which KERX anticipates within 12 weeks. We continue to anticipate E.U. approval. We reiterate our Buy rating and are raising our price target to $32 from $30.”

Pantginis continued, “We believe today’s approval was widely expected ahead of today’s PDUFA date based on positive Phase III data, under SPA. Recall that in Phase III trials, Ferric Citrate significantly reduced serum phosphorus levels, as well as resulted in increased ferritin and transferrin saturation levels. We believe this iron-sparing component of the drug is key to differentiating Ferric Citrate from other phosphate binders. The reduced need to use IV iron and ESA’s significantly reduces the cost of care for ESRD. During the conference call, management fielded questions regarding why the iron-sparing characteristic was not in the label. However, we don’t see this as a surprise considering that IV iron and ESA use were not endpoints in the trial, and the FDA will not typically include non-endpoint characteristics in the label. There were questions regarding a warning on the label that patients receiving IV iron may need to be monitored when starting Ferric Citrate to avoid iron overdose. We believe the wording of the label puts the onus on the IV iron for any potential overdose and not on Ferric Citrate (see below). We note that patients receiving IV iron are routinely monitored and we also note that Keryx saw no reports of iron overdose during the course of the Zerenex clinical program, through Phase III. Overall, we feel the label is quite strong. KERX plans to start the pivotal Phase III study of Ferric Citrate in predialysis CKD by the end of September.” 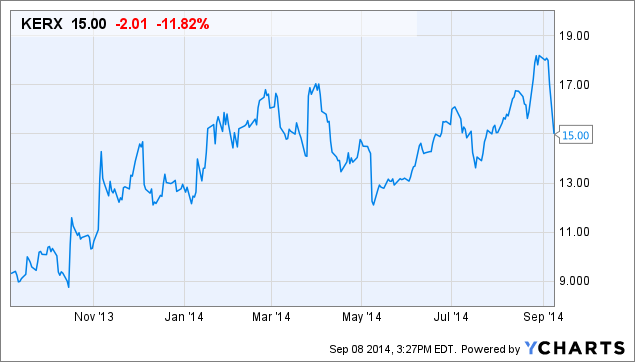