In a research report sent to investors today, Roth Capital analyst Joseph Pantginis reiterated a Buy rating on Keryx Biopharmaceuticals (NASDAQ:KERX) with a $32 price target, which represents a potential upside of 105% from where the stock is currently trading. The report follows the company’s third-quarter results, posting EPS of ($0.38), versus Roth’s estimate of ($0.24) and the consensus estimate of ($0.27).

Pantginis observed, “The third quarter represented a successful period for KERX, with the approval of Ferric Citrate in September 2014 for the control of serum phosphorus levels for chronic kidney disease patients who are on dialysis. The company has now completed hiring of its sales force and plans to launch Ferric Citrate in mid- December. We believe Ferric Citrate (FDA approved brand name pending) is uniquely positioned as it is the only phosphate binder with the properties of iron sparing and anemia benefit. Along with patents to 2024, the company is also seeking patent term extensions through 2028.” 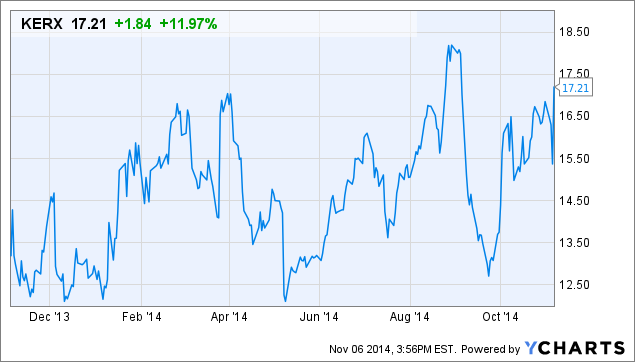