In a research note released today, Roth Capital analyst Joseph Pantginis reiterated a Buy rating on Keryx Biopharmaceuticals (NASDAQ:KERX) with a $30 price target. The report comes ahead of the FDA’s long-anticipated decision over whether to approve the company’s Zerenex for hyperphosphatemia.

Pantginis wrote, “We discuss the lead scenarios around the PDUFA date below. We assign a 95% chance of success surrounding the FDA approval of Zerenex. Supporting our thesis is a positive Phase III program under SPA. In addition, we believe the differentiation Zerenex can provide to physicians and patients alike is important both on treatment and pharmacoeconomic levels. Beyond statistically significantly reductions in phosphate levels in patients, patients should experience less pill burden and, importantly, patients’ statistically significant reduced usage of i.v. iron and ESAs is quite meaningful on two fronts, in our belief. First, patients receiving Zerenex will receive iron in a form that is more physiological useful to patients and reduces the potential for i.v. iron side effects by higher than needed levels. Second, the reduced i.v. iron and ESA usage seen in the studies is translatable to significant cost savings to the healthcare system.

The analyst continued, “We believe the company’s commercialization ramp up indicates KERX’s strong confidence in a potential U.S. approval for Zerenex. The company has stated plans to launch the product within 12 weeks of approval and has already made significant efforts to ensure that a substantial proportion of payors will cover the drug by launch. The company has hired sales directors and has plans to make offers to a total of 59 reps, contingent on FDA approval. Kerx also reported data from the long-term, open label extension study of Zerenex in dialysis-dependent CKD showing a consistent safety profile with the Phase III study, including no significant changes in liver enzymes or aluminum levels. KERX is preparing to launch the pivotal Phase III study in predialysis in the coming weeks.” 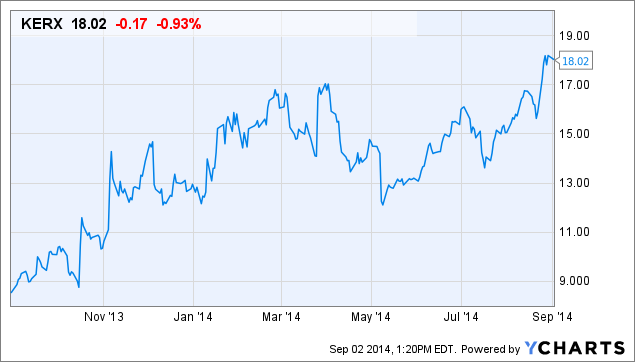