Shen wrote, “We believe investors are waiting to see how the market receives JKS’s anticipated yieldco IPO. On the back of yesterday’s news of China pursuing a trade war settlement, we would expect the Chinese solar complex, including JKS, to be up on the higher probability of reaching an agreement with better-than-expected industry profitability in the US.”

Shen added, “With an inline Q2 and Q3 guide, the biggest news from the quarter was that (1) GM expectations may need to be a touch lower, with management loosely indicating a range of ~19-21% on lower ASPs and (2) JKS was outbid for the Topoint assets (wafer: 500MW, cell: 500MW, module: 100MW) by the deep-pocketed Wanxiang Group, suggesting greater competition ahead in the module business. Notably, without the Topoint assets, the company still expects to achieve 2.3GW of wafer, 1.8GW of cell, and 2.8GW of module capacity by Q3’14, so we don’t expect the loss of Topoint to cause much disruption. The IPO of ~800MW of project assets is expected at YE’14 or early 2015 and could be an upside catalyst for the stock, but it’s not a foregone conclusion. We believe JKS’s story remains intact without much change to the overall narrative.”

According to TipRanks.com, which measures analysts’ and bloggers’ success rate based on how their calls perform, analyst Philip Shen has a total average return of 3.1% and a 43.4% success rate. Shen has a 19.2% average return when recommending JKS, and is ranked #1337 out of 3250 analysts. 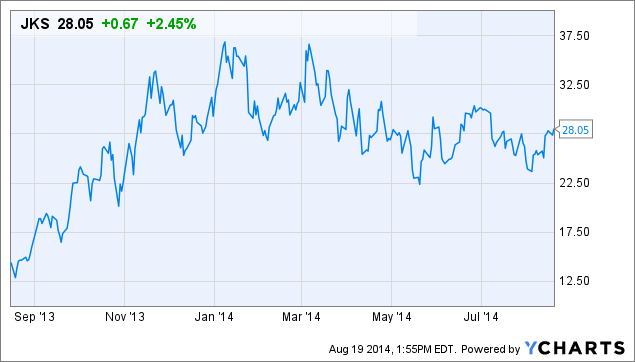