On August 13, 2014, IAMGOLD Corp (IAG) reported its second quarter results demonstrating a significant improvement in operating cash flow. In reaction to the results, Roth Capital analyst Joe Reagor today reiterated a Buy rating on IAG stock and raised his price target to $5.25 (from $4.25).

Reagor commented: “On August 13, 2014, IAG reported its financial and operating results for Q2 2014. Revenue of $288.6 million beat our estimate of $276.5 million, while adjusted EPS of $0.02 per share was essentially in line with our $0.03 estimate. The revenue beat was mainly due to production of 197,000 ounces of gold compared to our estimate of 184,000 ounces. We view Q2 as a strong operational quarter for IAG, with the only minor blemish coming at Rosebel, where lower than anticipated grades resulted in higher than anticipated cash costs.”

The analyst added, “We anticipate a strong second half from IAG at the operational level with higher grades at Rosebel, significant production from Westwood, and continued strong performance from Niobec combining to drive improved operating margins.” 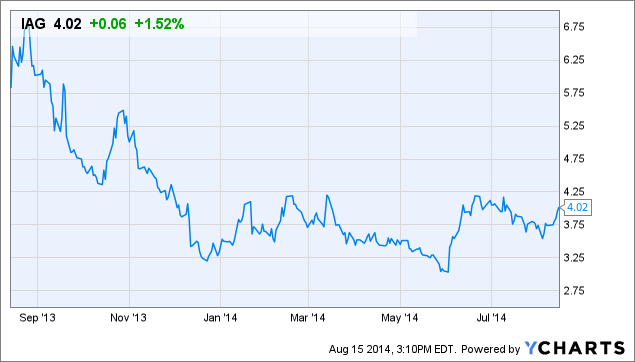