In a research note released yesterday, Roth Capital analyst Joseph Pantginis maintained coverage with a Buy rating on shares of Cytori Therapeutics (CYTX), and a price target of $10, following yesterday’s news that BARDA has sent a notice of intent to exercise Option 1 in their contract with CYTX, in which CYTX is developing the Celution system for thermal and radiation injuries. Exercise of this option will extend the contract until September 2016. As negotiations are underway, CYTX estimates that the full details of the contract will be released in a few weeks.

“We are encouraged by the notice of intent from BARDA to exercise Option 1 in their contract with Cytori. We view this as a validation to the company’s quality of work. This extension of the contract could be worth up to $35 million to Cytori, which represents significant non-dilutive funding. Recall that CYTX had a meeting with BARDA on June 10 in which it presented four multiarm large animal studies including 1) increased rates of wound closure, 2) improved wound vascularity and 3) improvements relative to a widely used skin substitute. Each of these endpoints were placebo controlled. The notice of intent means that these goals were achieved to the satisfaction of the review board which included representatives from BARDA, DOD, CDC, NIH and FDA. BARDA and Cytori have also been meeting with the FDA to discuss potential clinical steps forward for thermal burns. Commercial revenue could be bolstered with expansion into China and Japan, as well as continuing signon from clinical institutes interested in the Celution platform”, Pantginis wrote.

According to TipRanks.com, which measures analysts and bloggers success rate based on how their calls perform, analyst Joseph Pantginis currently has an average return of -5.2% and a 43% success rate. Pantginis has a -20% average profit recommending CYTX, and he is ranked #3067 out of 3162 analysts. 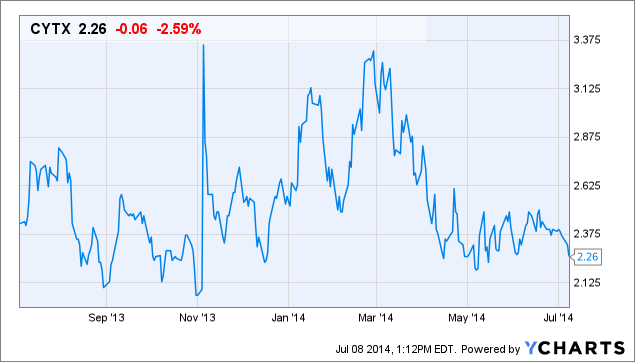