Roth Capital’s healthcare analyst Joseph Pantginis weighed in today with a few insights on Cytori Therapeutics Inc (NASDAQ:CYTX), after the company announced mature data and publication in Rheumatology of the 12- month Scleradec-I study. The data show statistically significant improvements in multiple measures as well as durability of the effect between six and 12-months.

Pantginis noted, “While the clinical data are from a small number of patients, we are impressed by the durability of the data between six and 12 months and believe the data bode well for the pivotal program. We believe Cytori is making significant strides in advancing multiple clinical programs, primarily the recently initiated Phase III STAR study of its cell therapy ECCS-50 for scleroderma associated hand dysfunction.”

The analyst continued, “This randomized, double-blind, placebo-controlled study is expected to enroll 80 patients at 20 sites, most of which are expected to be active by October. The primary endpoint is Cochin score at 24 weeks. The company expects to complete enrollment within one year with potential PMA submission in 2017. The company will also provide support to the E.U. confirmatory study, Scleradec II, in ~40 patients.”

Pantginis maintained a Buy rating on Cytori shares, with a price target of $4, which implies an upside of 826% from current levels.

All the 4 analysts polled by TipRanks rate Cytori Therapeutics stock a Buy. With a return potential of 845.2%, the stock’s consensus target price stands at $4.08. 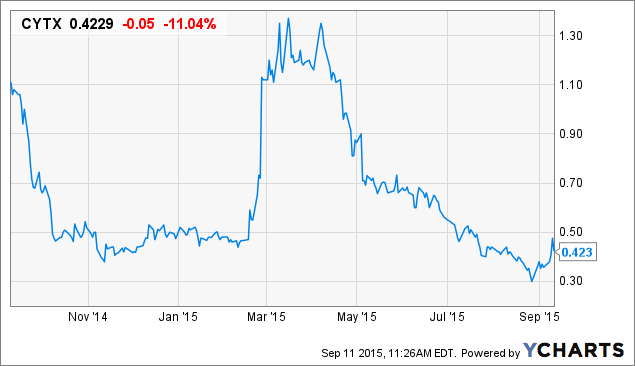