The investment firm Roth Capital was out with a research report on Cytori Therapeutics Inc (NASDAQ:CYTX), following the news that the company's regenerative cell technology system, Celution, has been granted Chinese FDA (CFDA) approval under the company's collaboration with Lorem Vascular.

The lead analyst Joseph Pantginis reiterated a Buy rating on CYTX with a $6 price target, which represents a potential upside of 354.5% from where the stock is currently trading.

Pantginis noted, "We believe this news represents a major win for Cytori. We believe the CFDA approval should move the needle significantly for Celution with this new foothold. The Asian markets have been very proactive in the regenerative medicine space not only with the native population but also through other avenues such as medical tourism. We also look toward results, which we believe will favor Cytori, from the recent positive regen med legislation out of Japan."

Furtheremore, "In the U.S., Cytori is now poised to 1) enter its first pivotal study (scleroderma), 2) release data from clinical programs and 3) grow its product and BARDA revenue streams. Key focus will be on the start of the U.S. pivotal study, STAR in scleroderma in mid-2015. The company will also provide support to the E.U. confirmatory study, Scleradec II, in ~40 patients." 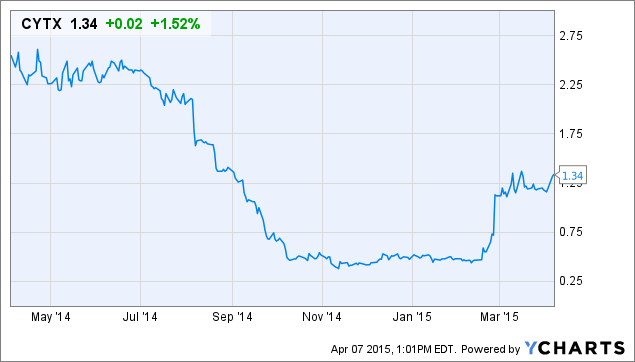