Pantginis comments: “We see this IND as a positive for CRIS as it represents Erivedge’s first expansion into non-oncology indications. We believe that the drug could have applications in a variety of non-oncology as well as oncology indications based on its mechanism of targeting the Hedgehog signaling pathway. The Hedgehog pathway is implicated in idiopathic pulmonary fibrosis, which is a debilitating lung disease often occurring in smokers that is characterized by the scaring of lung tissue leading to progressive shortness of breath. It is usually fatal.

With CUDC-427 back on track, Erivedge generating royalties in oncology, and this expansion of the drug into the non-oncology space, we believe CRIS valuation remains attractive”.

According to TipRanks, which measures analysts and bloggers success rate based on how their calls perform, analyst Joseph Pantginis currently has a one-year average return of -6.1% and a 33% success rate. Pantginis has a 6.9% average loss recommending CRIS, and he is ranked #3050 out of 3123 analysts. 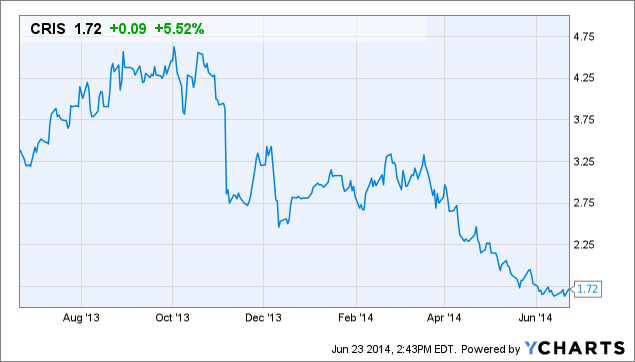