Roth Capital analyst Debjit Chattopadhyay weighed in with a few of his opinions on CTI BioPharma Corp (NASDAQ:CTIC) after the company released new patient-reported outcome (PRO) data for pacritinib, an investigational oral multikinase inhibitor with specificity for JAK2 and FLT3, from the Phase 3 PERSIST-1 study. The analyst reiterated a Buy rating on CTIC with a price target of $4.50, which represents a potential upside of 115.3% from where the stock is currently trading.

Chattopadhyay noted, “CTIC is well-positioned with a potentially class leading JAK2, FLT3 inhibitor, which could be widely adopted by MF patients with baseline platelet counts below 150K, which represents about 37% of the market, in our view. Looking beyond myelofibrosis, we believe that pacritinib’s kinome profile suggests its potential therapeutic utility in a myriad of blood-related cancers, including AML, MDS, CMML and even mantle cell lymphoma and certain solid tumors where JAK-STAT dysfunction is associated with the disease.”

Furthermore, “While data from both trials are vitally important for the future of CTIC, PERSIST-2 is likely to be the biggest value driver in our opinion because it compares pacritinib to ruxolitinib in patients with platelet counts below 100,000/uL. Based on a comparison of historic data, mechanism of action, durability of response, and tolerability profiles, we anticipate a positive readout for both these trials and are currently modeling a global launch during 2016.” 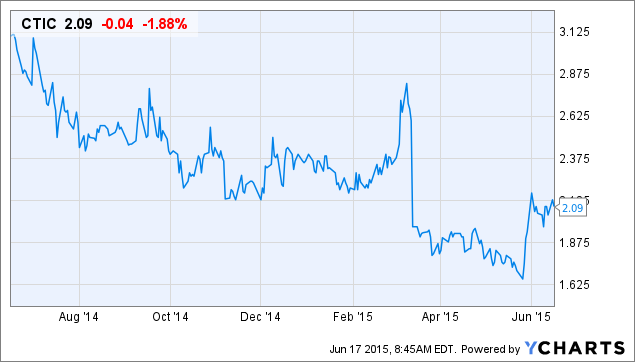