In a research report released yesterday, Roth Capital analyst Joseph Pantginis reiterated a Buy rating on Celldex Therapeutics (CLDX) with a $40 price target, following the company’s second-quarter results, posting EPS of ($0.32) vs. Pantginis’ estimate of ($0.34) and a consensus of ($0.32). Revenue for the second quarter was $0.59 million vs. Pantginis’ estimate of $0.5 million and a consensus of $0.34 million. CLDX ended the quarter with $252.4 million in cash, which management believes is sufficient to fund operations through 2016.

Pantginis noted, “Celldex is gearing up towards an eventful second half of the year with multiple milestones ahead. The Phase III ACT IV study of rindopepimut in frontline GBM should complete its screening of patients in the coming weeks and CLDX will update once the last patient is screened. The first interim analysis will be at 50% of events expected at 1H15 and consist of activity and futility analyses. So far 4,034 patients have been screened in ACT IV, of which 30.2% are EGFRvIII-positive. In the Phase II ReACT study in recurrent GBM enrollment is complete in group 1 (Avastin-naive patients) as well as in the first cohort of group 2 (Avastin-refractory patients). Data from group 1 as well as a go/no-go decision for enrolling the additional group 2 cohorts are expected by YE14. CLDX has been actively working on preparing the groundwork for rindopepimut approval and launch by creating an education platform that emphasizes the importance of EGFRvIII as a biomarker in GBM. Additionally, CLDX is working on creating business and distribution models as well as provider services and patients access plans in the US and EU. CLDX conducted an independent study looking at the likelihood of treating oncologists in the US and EU to prescribe rindopepimut to newly diagnosed patients with very positive feedback and likelihood of prescribing. We expect the remaining of the year to be a busy period for CLDX as it reaches milestones in all of its clinical programs”. 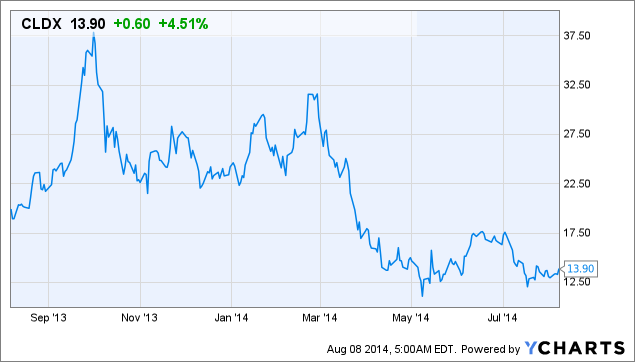