Friday, after the close, ANI Pharmaceuticals (ANIP) announced that the company acquired US rights to the antibiotic Vancocin (125mg and 250mg capsules) from Shire (SHPG). The company paid $11 million in cash for rights plus inventory on hand. The transaction is immediately accretive with a launch under its own label likely in 4Q14.

In reaction to the acquisition, Roth Capital analyst Scott Henry today reiterated a Buy rating on ANIP with a $40 price target.

Henry noted, “We viewed this as a highly favorable deal for ANIP investors. Based on our analysis, the deal has a payback of < 3 years, could be accretive to EPS by ~15 – 20 cents, has little risk, and could have potential upside levers from additional dosage forms”. He continued, “These capsule strengths of Vancocin generate ~$5.4 million in revenues and $4 million in non-GAAP EBITDA (per company guidance). The product is already generic and these “tail” revenues are relatively stable. Based on this math, the product should have a payback in 2.5 – 3 years (which is quite favorable in our opinion)”.  The analyst concluded, “We view this as the second great deal in a row for ANIP. Paybacks of < 3 years are relatively rare in specialty pharma, and we believe that this adds value beyond simply accretion to the EPS statement”. 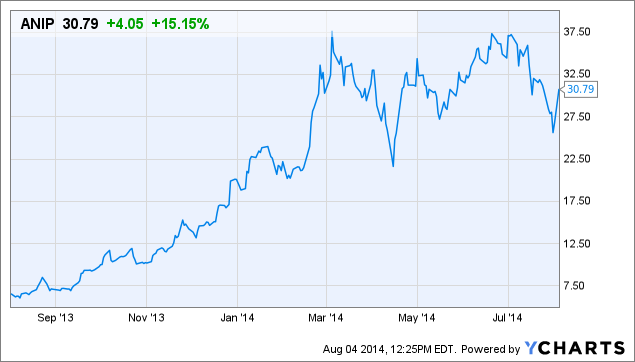