Celldex Therapeutics, Inc. (NASDAQ:CLDX) received another set of praises from analysts at Roth Capital, in addition to analysts at Cowen and Brean Capital. The research team, led by analyst Joseph Pantginis, reiterated a Buy rating on the stock and and a $43 price target, which represents a potential upside of 69% from where the stock is currently trading.

Pantginis observed, “We’re encouraged by the Breakthrough Therapy (BTD) designation for Rintega and believe this is a strong sign of support from FDA for this cancer vaccine in GBM, which still represents an unmet medical need. This event could help bring focus back on cancer vaccines with much of the attention currently on checkpoint inhibitors, TILs and CAR-T based approaches. This announcement comes ahead of the expected ReACT final data after which the company initially planned on approaching the FDA.”

Furthermore, “This announcement should help clear the regulatory path forward with this expedited approval path. As we mentioned in our previous notes, we believe rindo could represent the second cancer vaccine approved in the U.S. Recall that ReACT data presented at SNO in November 2014 showed that 1) the primary endpoint of PFS-6 was met in the bevacizumab naïve population (Group 1) and 2) a statistically significant improvement in overall survival was also seen.”

Analyst Joseph Pantginis has a total average return of 8.4% and a 55.3% success rate. Pantginis also has an 53.7% average return when recommending CLDX, and is ranked #261 out of 3483 analysts, according to TipRanks.com, which measures analysts’ and bloggers’ success rate based on how their calls perform. 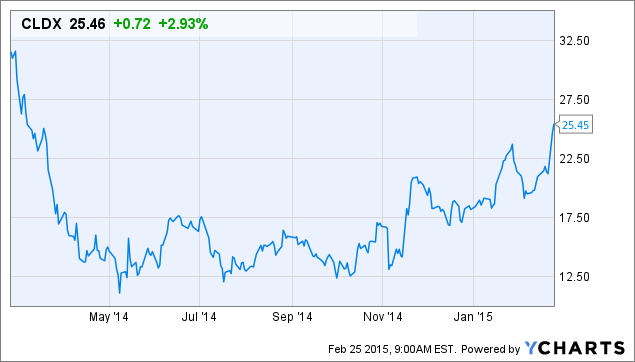