In a research report issued today, Roth Capital analyst Joseph Pantginis reiterated a Buy rating on Pharmacyclics (NASDAQ:PCYC) with a price target of $183, after the company was awarded a ~$3.81 billion contract to supply the Veteran’s Administration (VA) with Imbruvica for five years.

Pantginis said, “We believe that this contract with the VA continues to highlight the transformational impact that Imbruvica has had on treating B-cell lymphomas as a first in class BTK inhibitor. Recall that the drug received its first full approval in July 2014 following its initial accelerated approval in November 2013. We believe we are still in the early stages of launch. Recall that 2Q14 revenues for Imbruvica were $109.5 million. Based on a July 2014 label update, the label for the drug now claims survival benefit over ofatumumab in CLL. As the company previously stated, PCYC will recognize a $60 million milestone payment from partner Janssen (JNJ-NC) in 3Q14 based on receiving U.S. full approval. PCYC has so far received $505 million under the agreement with Janssen, and is eligible for up to $320 million more for certain development, regulatory, and approval milestones.” 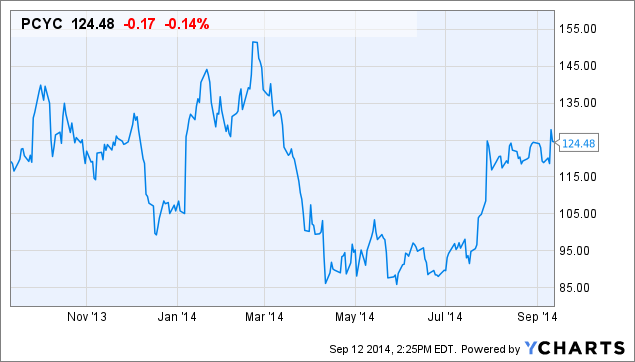