Regeneron Pharmaceuticals (REGN) announced that Eylea has been approved by the European Commission for use in patients with DME. Marketing of Eylea will be initiated in the E.U. by Bayer Healthcare (BAYRY) starting this quarter. Eylea is approved in the U.S. and
the E.U. for wet AMD and macular edema following CRVO. It recently received U.S. approval for visual impairment due to DME.

In reaction to the approval, Roth Capital analyst Joseph Pantginis reiterated a Buy rating on the stock with a $399 price target.

Pantginis noted, “We are impressed with this additional approval for Eylea, this time in the E.U., as it further expands the product’s range of approved ophthalmic indications, now encompassing three indications in the U.S. and the E.U. each, for AMD, CRVO and DME. Recall that REGN recently announced Eylea sales figures showing a 26% growth in net sales to $662 million, of which $415 million were U.S. sales and $247 million sales in ROW. The Eylea approval for DME marks the first time a VEGF inhibitor has been approved for the treatment of DME using injections that are less frequent than monthly. Recall that regulatory submissions have been made in the U.S. and E.U. for Eylea for the treatment of macular edema following BRVO. PDUFA date for the sBLA for Eylea in this indication is set for October 23rd, 2014. We believe the successful regulatory process for Eylea indications thus far will continue and that these will contribute to further growth of Eylea sales along with REGN’s strong collaborative R&D and commercial ties with other pharma and the favorable outcome measures from the advanced stage of REGN’s three antibodies in Phase II and III.” 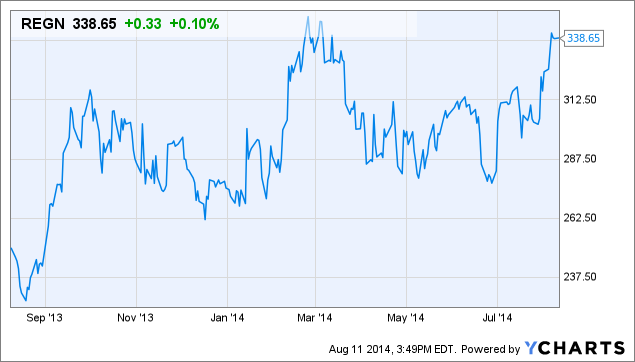