In a research report published yesterday, Roth Capital analyst Joseph Pantginis reiterated a Buy rating on Curis Inc. (NASDAQ:CRIS) with a $10 price target, as the company opened the expansion cohorts in its Phase I study of CUDC-907 in DLBCL and multiple myeloma. Additionally, following the FDA’s acceptance of its second IND for CUDC-907, CRIS will initiate a study of CUDC-907 in advanced solid tumors, including hormone receptor positive breast cancer.

Pantginis wrote, “With these advances we believe management is progressing well toward future data catalysts that will increase value for CUDC-907. We believe that the drug’s dual MOA as a PI3K and HDAC inhibitor can potentially expand its efficacy profile to include various solid tumors and hematological malignancies. We’re also encouraged from the focus on DLBCL and MM in the expansion groups, showing management’s efforts to maximize the drug’s potential. Recall that at ASH 2013 CRIS presented data showing that one out of 11 patients achieved a PR and seven achieved SD with best responses seen in DLBCL patients. Roche continues its development of Erivedge in AML and MDS (currently in Phase Ib/II study) as well as nononcology indications, specifically in idiopathic pulmonary fibrosis (IPF). The planned Phase II study is scheduled to enroll 130 patients and is expected to be initiated later this year. The Phase I study of DUDC-427 is ongoing and is expected to have expansion cohorts with ovarian and fallopian tube cancers. CRIS also expects to initiate combo studies of CUDC-427 with SOC chemotherapy in late 2014 or early 2015.” 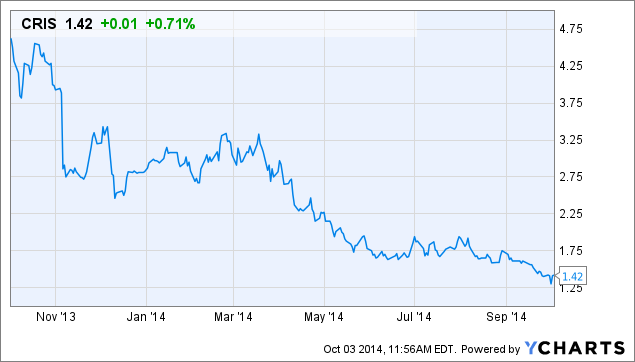