In a research report released yesterday, Roth Capital analyst Joseph Pantginis reaffirmed a Buy rating on Biolinerx (NASDAQ:BLRX) with an $8 price target, on the heels of the news that BLRX has submitted a protocol amendment to the FDA to test additional cohorts at higher doses in the ongoing dose escalation phase of the Phase II study of BL-8040 in r/r AM.

Pantginis wrote, “We are encouraged by the initial safety and pharmacodynamic data which show an encouraging dose response and wide therapeutic window, with no dose-limiting toxicities to date. No serious adverse events were seen. We believe the additional cohorts will ensure the optimal dose of the drug is taken into the expansion phase. The amendment would increase the number of patients in the study from 50 to 70 to ensure at least 40 patients are treated at the optimal dose in the expansion stage. The dose escalation is expected to be complete in early 2015 and data from the expansion stage are expected 2H15. Significant catalysts are upcoming for BLRX. Enrollment in the BL-1040 PRESERVATION I CE Mark study is expected to be completed by YE14. Final data are expected mid-2015. Data from a Phase I study of BL-8040 in stem cell mobilization are expected by early 2015. A Phase I/II IST of ‘8040 in CML is expected to be initiated by the end of 2014 in Israel. The company is also investigating lower repeated doses of BL-7010 to define a dose for the upcoming efficacy study in Celiac disease, which is expected to begin in early 2015.” 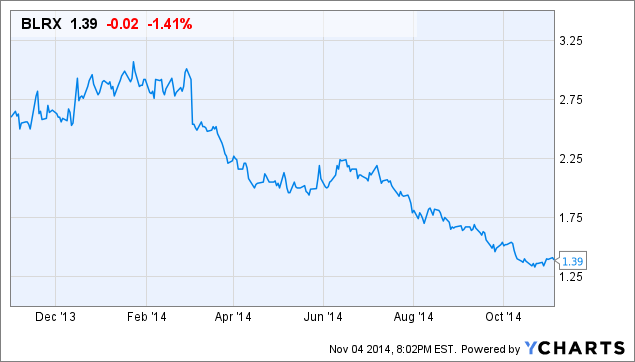