Arce wrote, “Acura’s 2Q net loss of $0.07 per diluted share is a penny better than our estimate on lower expenses and no share count growth. Acura has an August 14 meeting with FDA to discuss the Agency’s position that snorting may not be a relevant route of abuse for hydrocodone/APAP products, like Acura’s AVERSION “Vicodin” product candidate. We remain confident in a new commercial partnership for Acura’s approved AVERSION oxycodone (formerly Oxecta) product, still expected by year-end”.

The analyst added, “Management continues to expect a new commercial partnership agreement for AVERSION oxycodone by year-end 2014, though a relaunch of the product by the new licensee is more likely in early 2015. Acura is in various stages of discussions with multiple parties, all of whom have been granted access to the Acura data room to conduct due diligence. A new agreement is expected to include rights to the US and Canada markets with an upfront payment (and potentially sales-based milestone) payments to Acura, as well as royalties on net sales”.

With respect to ACUR’s financial position Arce noted, “As of July 30, Acura has total cash of $16.5M, which is about a one-year cash runway at current spending levels, before any upfront payment from an expected AVERSION oxycodone license deal”.

According to TipRanks.com, which measures analysts’ and bloggers’ success rate based on how their calls perform, analyst Ed Arce has a 36.0% average return and a 50.0% success rate. Arce is ranked #196 out of 3205 analysts. 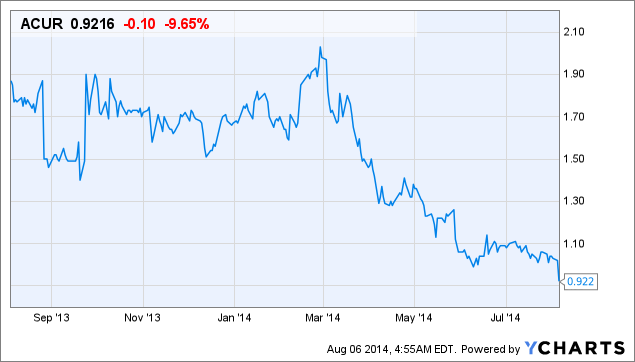