In a research report released Tuesday, Roth Capital analyst Michael Higgins reiterated a Buy rating on shares of AcelRx Pharmaceuticals Inc (NASDAQ:ACRX), while raising the price target to $8.50 (from $7.50), after the company announced the sale and monetization of royalties of Zalviso in European Union to PDL BioPharma in a deal worth $65 million.

Higgins noted, “We consider management’s strategy to monetize Zalviso’s E.U. revenue opportunity and put more weight on Zalviso’s U.S. opportunity as a very bullish sign of the ongoing discussions with the FDA.” The analyst continued, “PT raised by $1 to $8.50, primarily due to a reduction in our projected share count (i.e. 11.4M less in 2016E & 25.6M in 2020E).”

“Analyst Day is next Friday, October 2nd. We’re looking for an update on management’s General Advice meeting with the FDA in early September. We continue to expect the clarity on Zalviso’s regulatory outlook will lift ACRX shares. Having an extended cash run-way in-hand should lead to a more rapid response as well,” Higgins added.

Out of the 7 analysts polled by TipRanks, 4 rate Acelrx Pharmaceuticals stock a Hold, while 3 rate the stock a Buy. With a return potential of 70.9%, the stock’s consensus target price stands at $6.67. 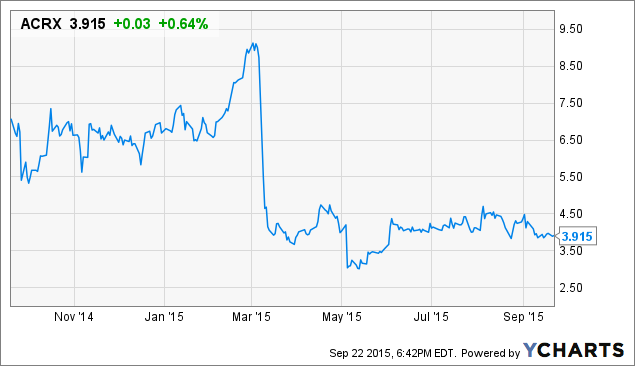