In a research report issued today, Roth Capital analyst Michael Higgins reiterated a Buy rating on shares of AcelRx Pharmaceuticals Inc (NASDAQ:ACRX) while raising the price target to $10.50 (from $8.50), after the company hosted an Analyst Day on Friday, October 2 in New York. The new price target represents a potential upside of 215% from where the stock is currently trading.

Higgins wrote, “The company didn’t provide specific feedback from its meeting with the FDA one month ago because the minutes haven’t been received yet, but incremental feedback was shared with investors. The focus of the meeting was as expected, with a clinical summary of ARX-04 and a more in-depth review of its marketing potential ahead its 2Q’16 NDA filing. With $104.8M (est.) 3Q’15 cash and an EV ~$40M, we believe investors are overlooking the value in Zalviso and ARX-04.”

“We are increasing our ACRX price target by $2 due to our higher price/dose estimate ($15 to $20) and higher confidence in its approval (50% to 75%). The company is on track to file ARX-04’s NDA in the first half of next year. Based on our estimates, the company has more than two years of cash, including the development of its own hospital sales force of ~65 reps,” the analyst added.

Out of the 7 analysts polled by TipRanks, 4 rate Acelrx Pharmaceuticals stock a Hold, while 3 rate the stock a Buy. With a return potential of 111%, the stock’s consensus target price stands at $7. 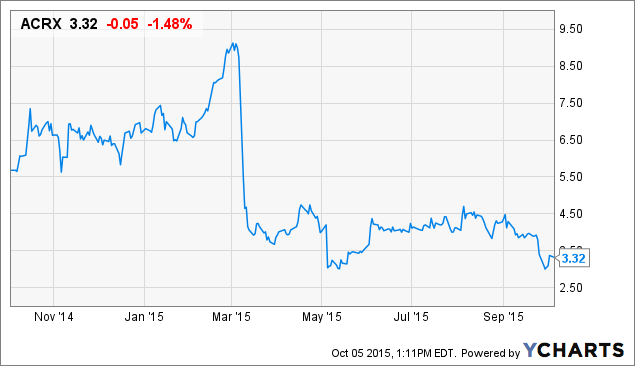