Martin commented: “1Q15 results modestly exceeded expectations. Management raised guidance. Healthcare is showing signs of a potential rebound in the U.S, with bookings at the end of the quarter suggesting a potential rebound in hospital spending. The Security segment continues to ride the cargo and border inspection tailwind. The foreign military sale provides confidence in financial performance in the coming quarters while RTT bookings could come on strong internationally in 2H15 and set the stage for continued growth in FY16. We like the risk-reward profile at 7.5x FY15 adjusted EBITDA and 19.1x pro forma EPS. With this week’s announcement of an amended agreement with Homeland Security regarding the X-ray generator issue from mid-2013, we believe the stock has been de-risked and recommend buying shares up to the 10x EBITDA range, or $90. OSIS has more than $50mm remaining on its share repurchase authorization and a strong balance sheet that could support debt to optimize the capital structure, should the Board elect to do so.” 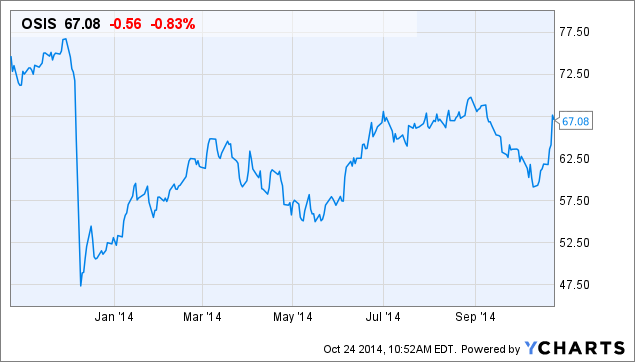