In a research report issued yesterday, Roth Capital analyst Joseph Pantginis maintained a Buy rating on TG Therapeutics (NASDAQ:TGTX) with a price target of $25.00, as Infinity announced a collaboration with AbbVie (NYSE:ABBV) for the development and commercialization of INFI’s PI3K-delta and gamma inhibitor duvelisib. INFI is entitled to a $275 million upfront payment, up to $530 million in additional milestones, shared U.S. profits, and tiered ex-U.S. royalties.

Pantginis noted, “We see this deal as positive for TGTX in terms of the untapped value of its differentiated PI3K inhibitor TGR-1202. The drug is currently in a broad development program, and we believe the drug will enter pivotal studies by the end of the year. TGR-1202 appears to be differentiated from other PI3K inhibitors in that it appears to have a more benign safety profile than others, including no liver toxicity seen to date. Early ‘1202 data also supports once per day dosing, compared to twice per day for INFI’s drug. Recall that at June 2014 medical conferences, investor feedback to ‘1202 clinical data to date was overwhelmingly positive, by our observation. We believe that TGTX is in control of whether the company wants to partner its products or not. It has already shown the ability to form fruitful alliances such as with Pharmacyclics’ (PCYCBuy) Imbruvica and the ongoing combo study with TG-1101. Management has commented previously that the company would like to hold onto the drugs for as long as possible, and possibly not partner at all. However, given the favorable terms that INFI secured in the deal with ABBV and given TGTX’s clinical data to date, we believe TGTX would have significant leverage if it chose to pursue a partnership.” 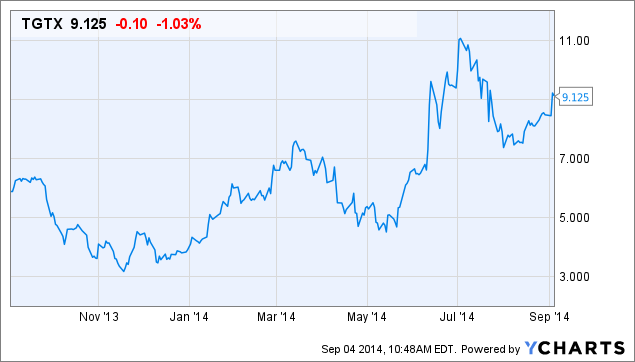