Roth Capital analyst Debjit Chattopadhyay was out pounding the table on Sarepta Therapeutics Inc (NASDAQ:SRPT) Monday, reiterating a Buy rating and price target of $45, which implies an upside of 32.5% from current levels.

Chattopadhyay wrote, “Contrary to the original FDA feedback to Prosensa (June 3rd 2014) in which the agency had urged initiation of two additional studies as soon as possible, since its acquisition by BioMarin, none of the additional studies have been initiated. Sarepta on the other hand is likely to initiate screening/ enrollment to its second pivotal (randomized) study (exon’s 53 and 45) during 2H15, which puts it significantly ahead of completion, in our view.”

“Sarepta completed its NDA submission on June 26th 2015, setting itself up for a late fall panel meeting. Recall that Sarepta is seeking accelerated and not full approval, which would be contingent upon the ongoing studies.”, the analyst added.

Out of the 16 analysts polled by TipRanks, 9 rate Sarepta Therapeutics Inc. stock a Buy, while 7 rate the stock a Hold. With a return potential of 1.7%, the stock’s consensus target price stands at $34.55. 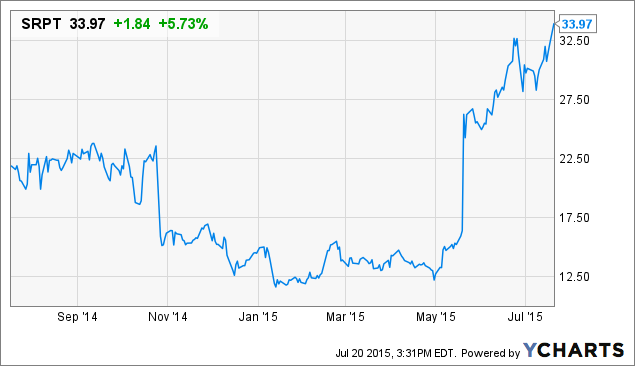