Roth Capital analyst Joseph Pantginis offered commentary on Galena Biopharma Inc (NASDAQ:GALE) following the presentation of the Phase 2 clinical trial of GALE-401 at the European Hematology Association 20th Congress in Vienna, Austria. The analyst reaffirmed a Buy rating on GALE with a price target of $8. Shares of Gale Biopharma are currently trading at $1.86, down -0.03, or  -1.59%.

Pantginis observed, “We believe these are promising data that further de-risk ‘401’s clinical profile. Recall that GALE completed enrollment in this trial six months ahead of schedule indicating physician interest in this study and a need for improved platelet count control in this patient population. These data also help demonstrate GALE-401’s equivalence to the immediate release form of Anagrelide. ‘401 aims to increase tolerability compared to Anagrelide IR while maintaining (or improving) efficacy in order to stabilize platelet counts.”

Furthermore, “Eventually the goal is to expand the target population and reach larger and younger patient groups. Driving this potential is the pharmacokinetic profile of GALE-401. The CR version reduces the Cmax by ~70% which maintaining ~100% of the AUC (area under the curve). We believe this study is a stepping stone in seeking approval via the 505(b)(2) regulatory pathway. Should this Phase II study be successful, we believe it should lead to a Phase III study in ~200 patients, followed by our projected approval of the drug in 2017.” 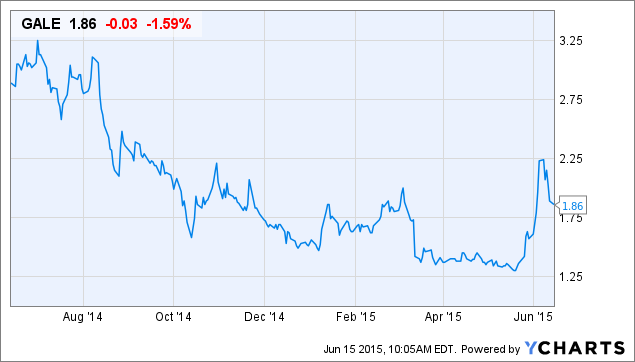