In a research note released yesterday, Roth Capital analyst Joe Reagor maintained a Neutral rating on Golden Minerals Company (AUMN) with a price target of $1.40, following yesterday’s news that AUMN  restarted production at Velardena. It also announced the addition of a third vein to the mine plan.

Reagor noted, “As we had already included an upside premium for potential positives from the mining restart we do not believe it is necessary to add an additional premium for Roca Negra. We now anticipate a production restart in Q4 2014. Based on this expectation and an expected return to positive cash flow by mid 2015 we are maintaining our price target of $1.40. We continue to use a sum of the parts analysis. We account for estimated negative cash flows for 2014 and 2015 of $17.3 million, net cash of $19.1 million at year end 2013, and a value of $50.2 million for the Velardena mine. We thus arrive at a total valuation of $52 million or $1.19 per share. To this we assign a $0.20 premium for the potential revaluation of the company in the event of a return to positive cash flows”.

According to TipRanks.com, which measures analysts and bloggers success rate based on how their calls perform, analyst Joe Reagor currently has a one-year average return of 13.7% and an 75% success rate. Reagor has a 51.6% average return when recommending AUMN, and is ranked #958 out of 3215 analysts. 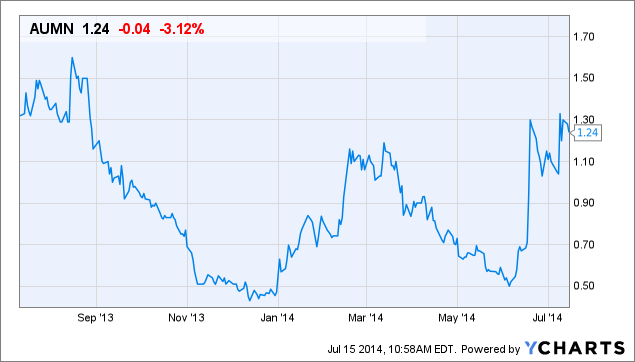