In a research report issued Tuesday, Roth Capital analyst Joseph Pantginis maintained a Buy rating on Regeneron Pharmaceuticals (NASDAQ:REGN) with a price target of $422, following the news that the the FDA approved the company’s Eylea for the treatment of Macular Edema following BRVO. Eylea has previously been approved in both the U.S. and Europe for wet AMD, Macular Edema following CRVO, and DME.

Pantginis wrote, “We are encouraged but not surprised by yet another approval for this successful drug. The approval is based on positive results from the 181-patient Phase III VIBRANT study which showed that at 24 weeks, significantly more patients who were treated with 2 mg of Eylea once every 4 weeks achieved a gain of at least 15 letters (three lines) in vision on the Early Treatment Diabetic Retinopathy Study (ETDRS) eye chart (53%), versus the number of patients who made the same gain when treated with photocoagulation (27%). Mean improvement over baseline for best corrected visual acuity (BCVA) was 17 letters for Eylea-treated patients, versus 6.9 letters for the photocoagulation control. Non-ocular serious AEs occurred in 8.8% of patterns in the Eylea arm, versus 9.8% of patients in the photocoagulation arm. The most common AE’s in the Eylea arm were cataract and conjunctival hemorrhage. Recall that Eylea was previously approved in both the U.S. and Europe for wet AMD, Macular Edema following CRVO, and DME. REGN has made regulatory submissions for Eylea for BRVO in the E.U. In addition to Eylea, REGN and partner Sanofi recently reported that the Phase IIa proof-of-concept study of dupilumab achieved the primary and all secondary endpoints in a study in severe sinusitis. We believe this study broadens the clinical benefit profile of dupilumab, which is also in development for treatment of atopic dermatitis (AD) and asthma. In addition, REGN and partner SNY plan to make BLA regulatory submissions for alirocumab in both the U.S. and E.U. by year end 2014, using a Priority Review voucher.” 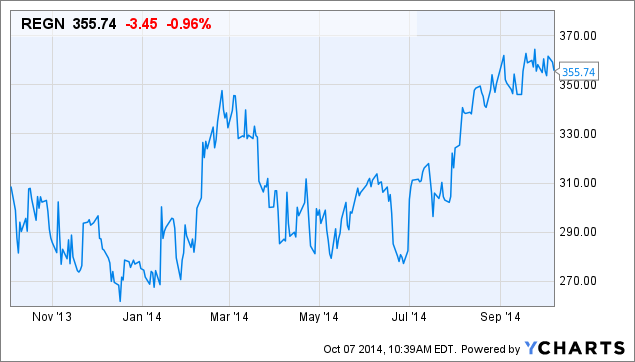