In a research report issued Friday, Roth Capital analyst Craig Irwin maintained a Buy rating on shares of Renewable Energy Group Inc (NASDAQ:REGI) with a $17 price target, following the company’s announcement of a $30 million buyback authorization, where management likely sees share repurchases as an opportunity to buy premiere assets of a low cost producer at an attractive price.

Irwin noted, “REG announced a $30m share repurchase program, where we estimate that at current prices the company would be repurchasing its plants for around $0.95/gal, which we view as a very attractive price for fully functional assets of a low-cost producer. The reinstatement of the 2014 Blender’s Credit will result in a roughly $95m 2Q15 cash collection, leaving ample liquidity for additional purchases.”

Furthermore, “Our $17 price target reflects a 7.0x multiple on our 2015 EBITDA estimate of $105 million. We see a 7.0x multiple are reasonable, since this is in line with diversified Argibusiness and Chemicals comparables. The market confusion around EPA volume mandates compressed 2014 profitability, where we expect this to materially improve in 2015 on visibility from what we expect to be a higher RVO in the 1.5 billion gallon range.” 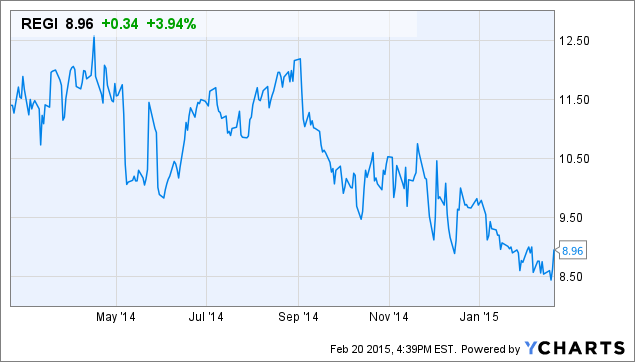