In a research report issued Monday, Roth Capital analyst Joseph Pantginis maintained a Buy rating on Pharmacyclics (NASDAQ:PCYC) and slightly raised his price target to $185 (from $183), following the news that Bristol-Myers Squibb (NYSE:BMY), Janssen (NYSE:JNJ) and PCYC announced a clinical collaboration in which they will assess the combination of Opdivo and Imbruvica in NHL.

Pantginis wrote, “We view this as further validation for Imbruvica’s appealing therapeutic profile. Given Imbruvica’s impressive efficacy data in CLL, including ORR and survival benefits, we believe that adding a checkpoint inhibitor could result in increased response rates. We base this upon recent data observed in the combination study of Imbruvica with the anti-CD-20 antibody, TG-1101 (TGTX-Buy-Focus List), which showed a ORR of 100% in CLL patients, a population included in this new study. We believe that this combination of a BTK inhibitor that targets an oncogenic signalling pathway in malignant B cells along with a checkpoint inhibitor that counteracts immune evasion mechanisms employed by these cells could demonstrate favorable and potentially synergistic outcomes. Recall that Imbruvica is approved for treatment in CLL and MCL patients who have received at least one prior therapy and in naive del17p (poor cytogenetics) CLL patients. The FDA also approved a new label for Imbruvica for CLL, which now includes a survival benefit for Imbruvica over ofatumumab. The full approval also entitled PCYC to a $60 million milestone payment from Janssen, which the company recognized in 3Q14. In July 2014, the European CHMP gave a positive opinion recommending full approval for Imbruvica in the EU for r/r MCL and for CLL patients who have received at least one prior therapy or who have a 17p or TP53 mutation. Full approval typically comes 2-3 months following the European CHMP positive opinion.” 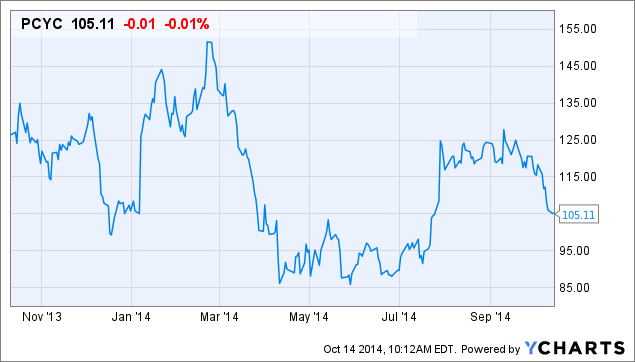