Pantginis said, “TG continues to broaden its horizons, in our belief, as it looks to identify the potentially best combinations for its drugs. Recall we are now waiting for the imminent initiation of the randomized Phase III combination study with TG-1101 and Imbruvica. Patients in this study will be previously treated highrisk CLL patients with at least one high-risk cytogenetic abnormality. The primary endpoint, under SPA, will be ORR supporting the filing for Accelerated Approval. The secondary endpoint of PFS is geared toward supporting full approval following longer term patient follow-up. The study is expected to enroll ~330 patients.”

Furthermore, “As we move into 2015, we expect additional visibility regarding new pivotal studies for TG-1101 and TGR-1202. We expect a strong showing at ASH this coming weekend from 1) the TG-1101 / Imbruvica Phase II study, 2) TG-1101 / TGR-1202 combo study and 3) TGR-1202 monotherapy update. For the ‘1101 / Imbruvica study we expect data from >35 patients and response rates from the combination to continue to outperform CLL data seen to date with Imbruvica alone (~60%). We believe these data will act as an important proxy for the upcoming Phase III.” 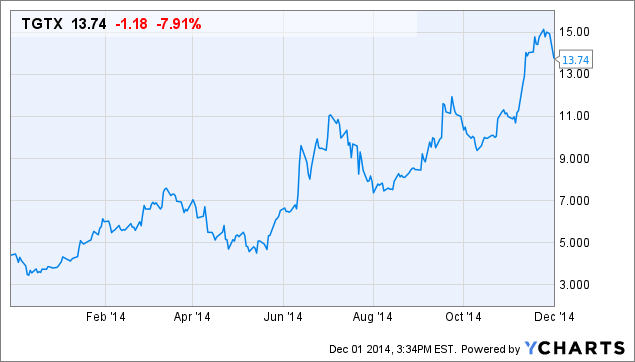