In a research note issued August 15th, Roth Capital analyst Dave King maintained coverage with a Buy rating on shares of Summer Infant (SUMR) and raised his price target to $4.50 (from $3.50), following the company’s second-quarter results. SUMR’s revenue exceeded estimates, while core EPS was a penny above King’s projection.

King noted, “2Q14 core EPS of $0.03 was a penny above our estimate and in-line with consensus, as stronger revenues and gross margin were offset by higher expenses. Reported EPS of $0.02 included ($0.01) in one-time severance costs and board fees. Revenues fell 2% YOY, but grew 3% sequentially to $52.6 million, above both our $50.8 million estimate and consensus of $51.4 million. Excluding the planned exiting of major licensing agreements and previously-disclosed monitor recall, revenue would have grown 10% YOY driven by growth in new products, online sales and international markets–particularly Asia Pacific and Latin America. Looking forward, management still expects revenue and earnings to continue improving sequentially through 2014, helped in part by the 2H14 anniversary of discontinuing major licensing agreements.”

The analyst added, “Adjusting for the 2Q14 upside and continued revenue and EPS growth, we are raising our 2014 and 2015 EPS estimates both by $0.05 to $0.20 and $0.25, respectively. We maintain our Buy rating, while raising our price target to $4.50 to reflect the multiple growth opportunities ahead, a near-term catalyst in a potential debt refi, and reasonable valuation on free cash flow and “normalized” EBITDA/EPS.”

According to TipRanks.com, which measures analysts’ and bloggers’ success rate based on how their calls perform, analyst Dave King has a total average return of 2.4% and a 45.8% success rate. King has a 38.5% average return when recommending SUMR, and is ranked #1660 out of 3242 analysts. 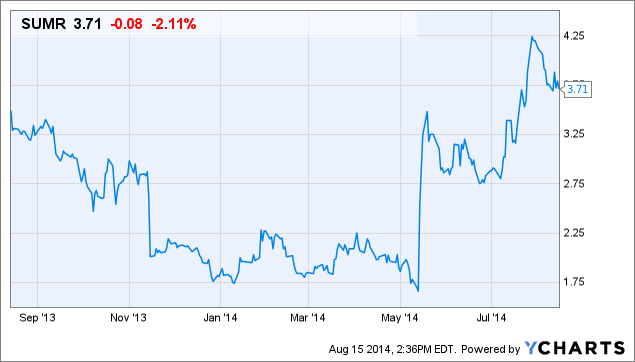