Roth Capital analyst Richard Baldry maintained a Buy rating on Salesforce.com (NYSE:CRM) with an $80 price target, following the company’s release of its fiscal third-quarter results. Revenues grew 28.6% yr/yr to a record $1.384B and drove pro forma EPS of $0.14. Roth Capital were at $1.369B and $0.13, respectively.

Baldry observed, “3QF15 results were good in our view, particularly when adjusted for nonoperating foreign exchange dampeners which will challenge near-term and F16 results and comparisons. From the highest level, with shares down roughly 13% from their highs despite maintaining a roughly 30% organic revenue growth rate on a constant currency basis year-to-date, we would view any post-quarter valuation pressure as an opportunistic entry point for sidelined investors.”

The analyst concluded, “As Salesforce.com remains the largest SaaS player, and a still rapid grower, we view its former peak valuation as still possible to recapture. However, our unchanged $80 price target assumes only an 8x revenue multiple, applied to our 3QF16 run-rate forecast, to account for a slowing reported growth rate (currency and scale impacted).” 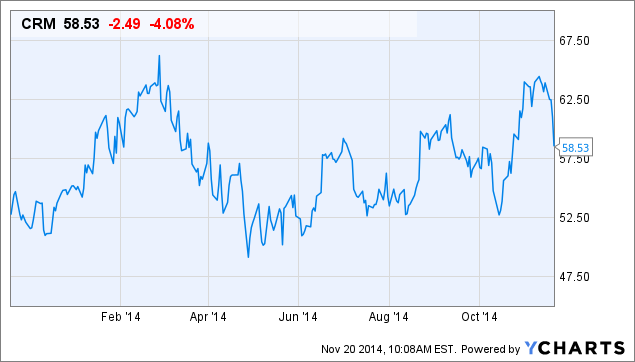