The analyst continued, “We believe that Micron is well positioned for stable growth in revenue and earnings with a well-diversified portfolio of products, end markets, and customers. For 3Q14 (May), we estimate the company’s product mix was NAND flash (28%), DRAM (68%), NOR flash (3%), Other/CMOS image sensor foundry (1%). The company’s exposure to the commodity PC DRAM business is 25% of revenues; while more profitable segments such as cellphones/smartphones/tablets (40%), consumer electronics (5%), networking and storage (10%), servers (15%), automotive/industrial/ medical (5%) drive growth. Micron also has a diversified customer base with the top 50 customers that represent 53% of revenues; while a long list of 7000 other customers represent the remaining 47%”.

According to TipRanks, which measures analysts and bloggers success rate based on how their calls perform, analyst Krishna Shankar currently has an average return of 26.9% and a 73% success rate. Shankar has a 104.6% average profit recommending MU, and he is ranked #194 out of 3125 analysts. 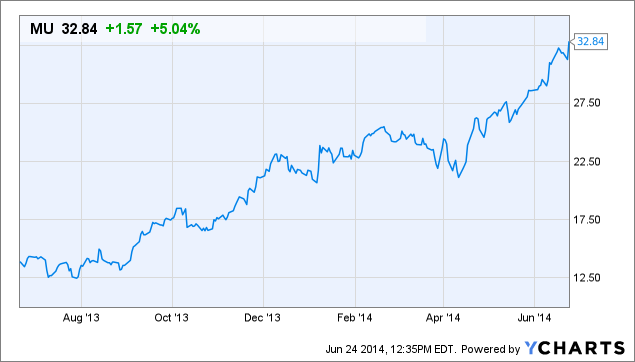