In a research report issued today, Roth Capital analyst Scott Henry maintained coverage with a Buy rating on shares of Lannett Company (LCI) and $45 price target. The report follows Tuesday’s news that Impax Laboratories (IPXL) received a subpoena and interrogatories from the State of Connecticut Attorney General concerning its investigation into sales of digoxin. Why this matters to LCI? The price for digoxin has increased significantly in recent months (>5X) despite more than one competitor. Naturally, some may question whether any collusion took place that maintained high prices in a competitive environment. LCI may also get a subpoena given that LCI is also a seller of digoxin at these higher prices. Digoxin is ~23% of LCI revenues.

Henry noted, “At this point, we know of no price fixing and rather view the generic industry as opportunistically pricing for maximum profit. Still, this event raises the awareness that the current generic environment may not be sustainable indefinitely”. He continued, “Generic companies (LCI included) have had considerable stock price runs on the backs of large price increases. If investors perceive these price increases to have a limited duration, this could result in multiple contraction. We are more cautious on LCI shares pending clarity of recent events and/or reduced valuations”.

According to TipRanks.com, which measures analysts and bloggers success rate based on how their calls perform, analyst Scott Henry currently has an average return of 31.1% and a 52% success rate. Henry has a 13.1% average return recommending LCI, and is ranked #208 out of 3217 analysts. 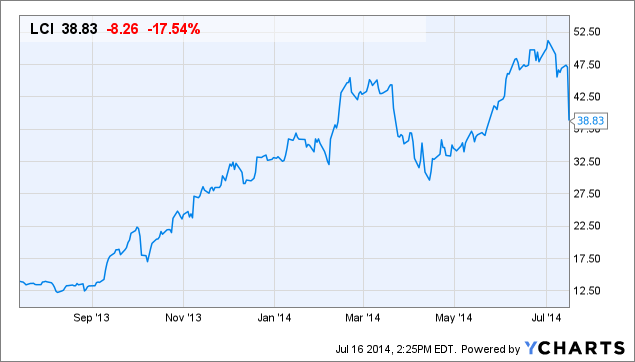