In a report published today, Roth Capital analyst Scott Henry maintained a Buy rating on Lannett Company (LCI) with a $45 price target, following yesterday’s post disclosures of subpoenas to IPXL and LCI into the pricing patterns of Digoxin, which casued a 17% declined in share value.

Henry commented: “We believe that these are headline risks that are unlikely to materialize beyond an inquiry. We further believe that a 17% LCI share price decline appears an over-reaction”. He continued,”In our opinion, the higher pricing of Digoxin reflects a new oligopoly based pricing model among limited generic competition. We view this as a new business model of “price followers”, and we do not expect that any collusion has taken place (this is our opinion). Typically, headline risks results in a 5-10% haircut to the share price (versus the 17% decline for LCI). By example, shares of IPXL (also received a subpoena) dipped only 2% after being positive in the early part of the day. We do not expect any further headlines from this subpoena in the near-term (and possibly the next 6-months)”.

The analyst added, “We spoke with LCI management, which appeared adamant that nothing wrong was done within the pricing of Digoxin. The company further appeared to believe that Digoxin sales would be business as usual with no changes in pricing”.

According to TipRanks.com, which measures analysts and bloggers success rate based on how their calls perform, analyst Scott Henry currently has a one-year average return of 24.6% and an 43% success rate. Henry has a -4.2% average return when recommending LCI and is ranked #303 out of 3215 analysts. 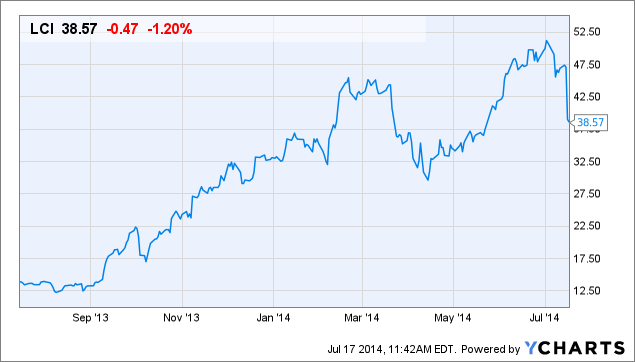