Pantginis wrote, “The SVC respiratory measure, which predicts disease progression, showed similar changes in magnitude in all subgroups and statistically significant changes in most. These data validate the previous finding that SVC was significantly reduced in the overall patient population at four weeks, indicating tirasemtiv has a durable effect on pulmonary function”. The analyst continued, “We continue to believe that the positive enduring effect of tirasemtiv on SVC should inform the future steps that CYTK will take regarding the clinical development of tirasemtiv. Recall that while the primary endpoint of change in ALSFRS-R was not met, tirasemtiv is the only drug to date that has shown any effect and benefits in respiratory function in an ALS study”.

In closing, Pantginis added, “We maintain our Buy rating, and $13 price target, based on the omecamtiv mecarbil program and look to potentially reassess new contribution by tirasemtiv based on the growing data set from BENEFIT-ALS. We believe the valuation of CYTK shares remain attractive at these levels”.

According to TipRanks.com, which measures analysts and bloggers success rate based on how their calls perform, analyst Joseph Pantginis currently has a one-year average return of -7.9% and a 38% success rate. Pantginis has an -59.2% average profit recommending CYTK, and is ranked #3158 out of 3211 analysts. 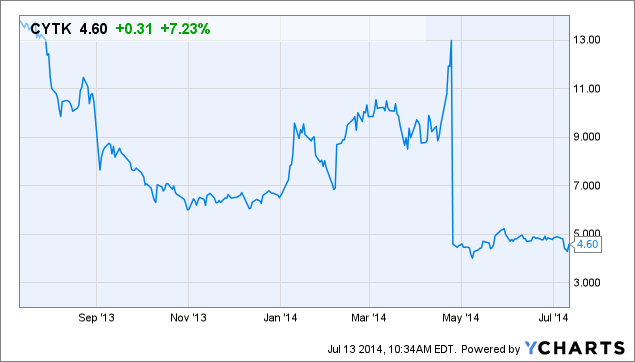