Roth Capital analyst Joseph Pantginis maintained a Buy rating on Cytokinetics (NASDAQ:CYTK) with a price target of $13, as the company provided an update regarding its cardiac muscle contractility drug omecamtiv mecarbil, to which Amgen holds an exclusive worldwide license.

Pantginis observed, “We are encouraged by the progress the omecamtiv mecarbil program is making. Recall that our current valuation is based solely on this program. CYTK recently provided additional visibility regarding the tirasemtiv program in ALS. Following consultation with clinical and statistical experts, CYTK concluded that the final analysis of the Phase IIb BENFIT-ALS study supported continued investigation of tirasemtiv in ALS patients in a potential Phase III study. The robust and statistically significant reduction of slow vital capacity (SVC) decline in tirasemtiv-treated patients versus placebo-treated patients was sustained throughout the 12 week dosing period and, notably, the response remained durable at four weeks beyond the dosing period. The company began planning a potential Phase III, which could be initiated in 2015. CYTK also initiated discussions with the FDA regarding the BENEFIT-ALS data and the use of SVC as an endpoint in the proposed Phase III study. We will reassess the tirasemtiv program’s contribution to valuation following feedback from the regulatory agencies.” 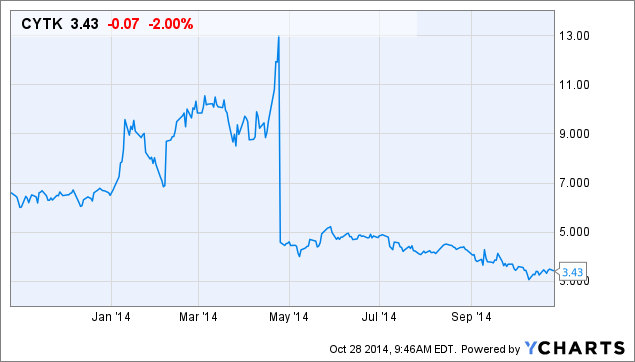