ANI Pharmaceuticals Inc (NASDAQ:ANIP) shares are down 1.5% today after the company released fourth-quarter net earnings of $20.01 million or $1.82 per share, compared to $3.43 million or $0.36 per share in the prior-year quarter.

In reaction, Roth Capital analyst Scott Henry maintained a Buy rating and a $65 price target on the stock, which implies an upside of 7% from current levels.

Henry noted, “We note that the company is only assuming “stable” EEMT market share and no new product launches. We expect EEMT share to climb in 2015 (and script data is already taking a positive turn). This should produce upside to the baseline guidance.” The analyst added, “Key issue in the guidance is that the company assumes “stable market share for EEMT.” Also, the company assumes no new product introductions. We expect significant gains in EEMT market share in 2H15. This could make the company guidance look very conservative. We would not over-react to conservative guidance as we consider this a baseline.” 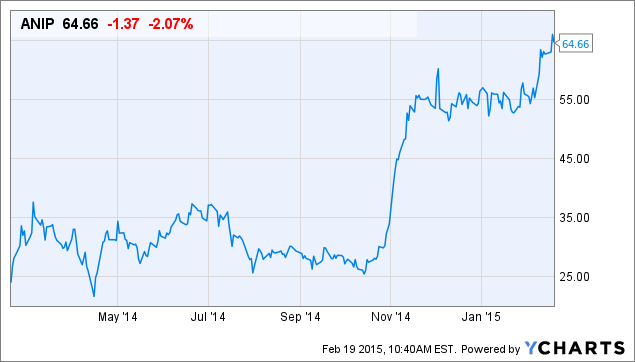