Pantginis wrote, “We believe LGND is in its strongest financial position to date with a growing cash balance, debt fully paid off, an ongoing share repurchase program of up to $10 million in common shares, and increased 2014 guidance. Material progress has been made in 1H14 on both partnered and internal programs, and LGND has executed a number of significant licensing deals. Strong revenues this quarter were driven by higher royalties on Promacta and Kyprolis. Both achieved record sales in 2Q14 and both showed ~15% quarter-over-quarter growth. We are encouraged by the positive Phase III interim analysis data from Amgen (AMGN) from the ASPIRE trial of Kyprolis in MM which showed that Kyprolis + Revlimid + low-dose dexamethasone (KRd) led to a statistically significant increase in PFS over Revlimid + low-dose dexamethasone (Rd) alone (26.3 versus 17.6 months). OS data is not yet mature, but showed a trend toward improved OS for the KRd arm. AMGN expects to make worldwide regulatory submissions in 1H15”.

Pantginis added, “We recommend steady accumulation of LGND shares, as we anticipate that current revenue streams from partnered products and the broad “in development” portfolio are poised to drive significant growth in the near and longer term”. 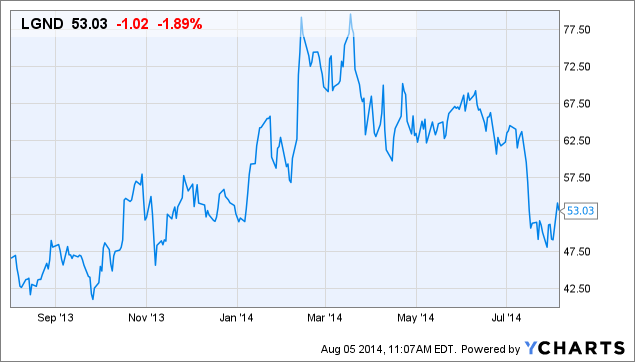